Trans* Jersey invited Roisin Pitman to write a guest blog about staying safe. Roisin was in the States of Jersey police force for over 10 years and is the sensei at Phoenix (Jersey) School for Therapeutic Arts, which specialises in Aikido. She has recently started up Red Zen (Channel Islands) that offers self protection and fitness solutions to women of all shapes, sizes and abilities. 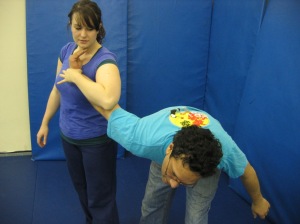 When a trans man or woman makes the decision that they are finally going to live and exist day-to-day in their true gender they are plunged into a world of excitement, fear, worry, uncertainty and self-doubt, all rolled into one.

As a trans woman I was told by a friend at an early stage of my transition that if I acted and went about my business as if I had every right to be a part of society then nobody would care if I was trans or not. There are always early fears and hyper sensitivity as we adapt to living outwardly in the gender that we know we are.

We can take every stare, double take, whispering as you pass, or laughing out loud, to mean that these are all aimed at you, when in fact that is your hyper sensitivity working overtime, which is quite natural. The stare may not have been relevant, the double take might be because they like your dress, the whispering – totally unconnected, and the laughing out load might just have been two people sharing a joke, not at your expense. This hyper sensitivity dies down as we become more comfortable in our ‘skin’.

In a recent conversation with a trans man it was agreed, broadly speaking, that he does not have to deal with some of the worries of a trans female. For example, women have been wearing trousers and masculine clothes for decades; there are many smaller guys out there so a small framed man would not draw too much attention; with testosterone there is often beard growth, an obvious male marker, and voices do drop after a while on hormone therapy.

If you are a trans female with a masculine frame, especially a tall build, with big hands and feet and a low voice it is much easier for you to be ‘read’, regardless of whether you are wearing a summer dress or a trouser suit. Often one’s facial features can give you away and affecting a falsetto voice is a sure giveaway, along with other male markers such as a visible Adam’s apple. Although, to be fair, there are many women with a protruding Adam’s apple, sometimes due to the slightness of frame, or the part of the world that they come from, or sometimes due to an eating disorder, which leaves the neck quite thin and shows all the blemishes and peculiarities. I was married to a woman with a prominent neck bulge and I can assure you that she was born female. I did wonder for a while!

It appears, therefore, that trans females have a lot more work to do to blend in than their male counterparts and sometimes, as we learn to be more female, the characteristics that were normal as a male, come back to haunt us as a female.

We are lucky here in Jersey that random violence is quite rare, although not absent. As a former police man in Jersey I encountered violence on an almost daily basis, but rarely was it a totally random act without warning. With the grace of one’s God or belief system, I survived twelve years on the street with little or no injury. Although, on three occasions, I was attacked with a knife, fortunately surviving without injury, partly due to luck and partly due to my training, not as a police officer but as a martial arts student of Aikido (a Japanese defensive art using the opponent’s body weight and aggression against themselves), without causing undue injury to the soon to be arrested felon.

I have now been studying Aikido for thirty-four years, twenty-seven of them as an instructor. I founded my own school in 1987 and now have Clubs in Jersey, Guernsey, UK, France and Italy. I currently hold the rank of fifth Dan black belt and rank among the top 2% of female Aikido instructors in the British Isles. I have blended my experience as a street police officer with that of a martial arts coach to create a unique insight into self protection and awareness that not only includes physical responses to a myriad of attacks, but blends with it the theoretical side of self protection by way of lecturing on a number of relevant subjects such as:

I have attended many ‘self defence’ courses (put on mainly for women) as either an observer or guest instructor, run by numerous martial arts clubs over the last thirty years, and they have all disappointed me in the way that they were approached and delivered. Most martial artists teach their own martial style and dress it up as self defence when, in fact, although on the same spectrum, self defence and martial arts are at opposite ends. It is not just a matter of dressing in civilian clothes and teaching a martial art, it goes much deeper than that, requiring an in-depth knowledge of the human psyche and their behaviour patterns. Awareness is key.

If anyone attends a self defence course where they are told that in six, eight or ten weeks they will be able to deal with a violent altercation then they should run for the hills! There is no guarantee that any human will be able to deal with a violent situation, there are only tools that can be taught to make someone more aware and give them a little more knowledge to assist them. You might be, for example, a very highly ranked martial artist that people would consider infallible in a real situation but one thing alone marks the difference between the training room and real life: the fear factor, or the ‘flight or fight’ syndrome, when the body produces adrenaline in an effort to ready itself for combat. Some can handle the fear factor, many cannot.

Trans* people often feel even more vulnerable, especially in the early days of transition when often, especially male-to-female, they believe that every movement, mannerism and action is being ‘read’ by another person. They think everyone must just ‘know’ who and what they are. This is the hyper sensitivity that I referred to at the beginning.

Trans* Jersey would like to thank Roisin for her contribution to the website and sharing her knowledge. If you would be interested in attending a self protection and awareness course, set of seminars or informal talk with a question and answer session, Roisin runs all sorts of courses to suit your needs. It can be theory only or a mix of physical and theory. If there are enough people (at least four with no upper limit), Roisin can arrange for a special Trans* Jersey course or, if there is less interest, she can offer you a place on courses she is already running. Please contact Roisin Pitman on roisin.pitman@hotmail.co.uk to register your interest in attending a self defence course and the sort of course you would be interested in.