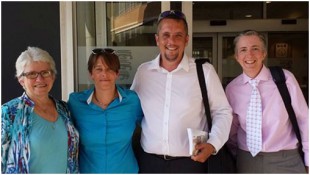 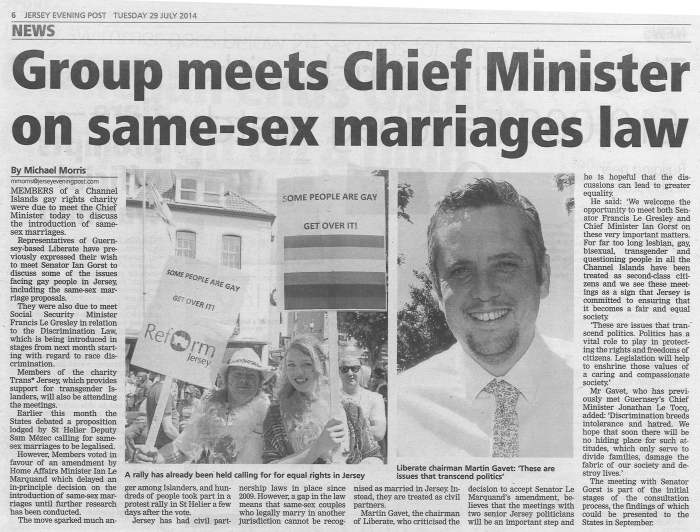 The second meeting with Jersey’s Chief Minister, Senator Ian Gorst, follows the recent debate when the States of Jersey Assembly voted 24 to 18 in favour of a proposition by Home Minister Ian Le Marquand to delay an in principle decision on equal marriage in Jersey. Instead the Assembly agreed to a round of public consultation on the subject which will end in December.

The move provoked strong public reaction and anger from islanders, who recently voted 81% in favour of equal marriage in a poll carried out by the Jersey Evening Post.

The meeting is part of an initial round of meetings with interested stakeholder groups as part of the public consultation on Equal Marriage.

“We welcome the opportunity to meet with both Senator Francis Le Gresley and Chief Minister Senator Ian Gorst, on these important matters.

“For far too long Lesbian, Gay, Bisexual, Transgender and Questioning people in all our Channel Islands have been treated as second class citizens and we see these meetings as a sign that Jersey is committed to ensuring that it becomes a fair and equal society.

“These are issues that transcend politics. Politics has a vital role to play in protecting the rights and freedoms of citizens. Legislation will help to enshrine those values of a caring and compassionate society. Values that acknowledge that everyone is born free and equal in both dignity and rights.

“It will define how we as individuals are expected to treat each other, no matter what someone’s gender is, their gender identity, their sexual orientation, race, disability or belief. Discrimination breeds intolerance and hatred. We hope that soon there will be no hiding place for such attitudes which only serve to divide families, damage the fabric of our society and destroy lives.” 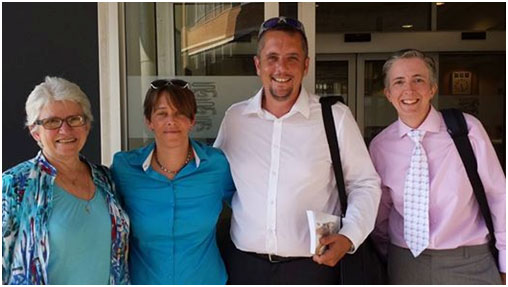 Liberate, a Guernsey-based registered charity which represents the Channel Islands LGBTQ community described the meeting as constructive, well-researched and informed.

Liberate gave a video presentation to the meeting, which included representatives from other groups working with Jersey’s LGBTQ community, including Trans*Jersey which also gave a presentation.

During the recent States of Jersey debate on a proposition on Equal Marriage there had been considerable discussion around the “unintended consequences” of introducing equal marriage.

“Our video obviously struck a chord with those present at the meeting, especially Senator Gorst and his colleagues” said Martin Gavet, Chair of Liberate.

“What society needs to wake up to is that this has a hugely damaging effect especially in respect of areas such as mental health and wellbeing. LGBTQ people are known to be twice at risk of anxiety, depression, substance misuse, self harm and suicide. Gay teens have recently been shown to be 6-9 times more likely to attempt to take their own life. Why? Because of the feelings of isolation, bullying, harassment, etc.

“This costs us in terms of emergency, acute, mental health care, policing, education and the welfare state. However this is just the financial cost to society. The tragedy is that families have disowned their own children just for being LGBTQ, and lives have been lost and will continue to be lost in our islands due to such prejudice.

“So long as we have laws that discriminate, we will find it harder to challenge prejudice as not all of us will be treated fairly and equally in dignity and rights.

“Above all this is about allowing two people who love each other the right to show that ultimate commitment – giving them the right to marry. The fact that we as a community have had to fight so hard for this right clearly shows to our decision makers how much we value and respect the institution of marriage”.

The meeting discussed models of equal marriage and civil unions in other jurisdictions including, England and Wales, Scotland, and South Africa. It is the first of several meetings and it is anticipated that the public consultation process may finish before Jersey’s elections in October.

Earlier in the day Liberate and Trans*Jersey also met with Senator Le Gresley, Social Security Minister over the introduction of the Discrimination Law and the inclusion of provisions relating to sexual orientation and gender identity.